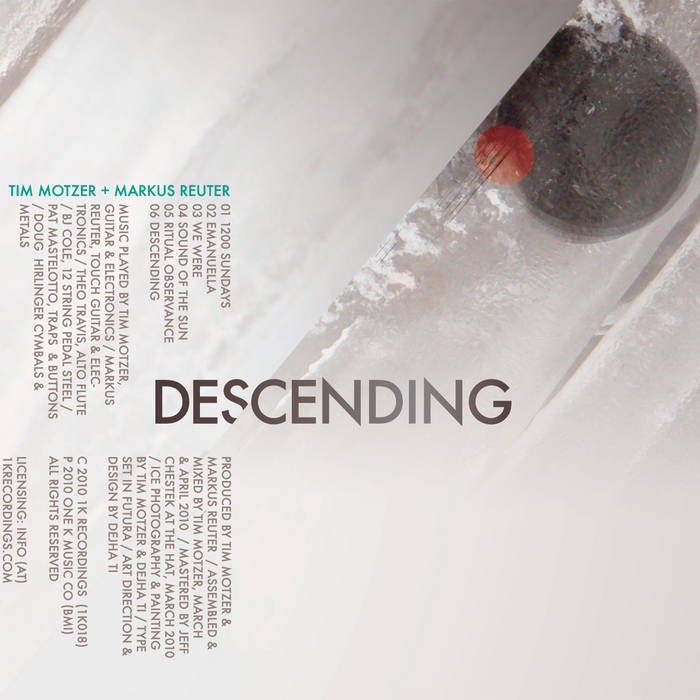 "Any small amount of research on Tim Motzer reveals a wide scope of possible musical landscapes. This Philadelphia-based guitarist and composer has played on projects and tours with King Britt, Ursla Rucker, David Sylvian, Burnt Friedman and Jaki Liebezeit as well as created numerous solo projects and a string of remixes and film scores under his belt. On Descending he plays guitar and electronics along with Markus Reuter on Touch Guitar and electronics. They are joined by alto flautist Theo Travis, a touring musician for Robert Fripp and Gong. As well there is the pedal steel guitarist BJ Cole a who has made contributions to the work of The Orb, Brian Eno, KLF, Squarepusher and Luke Vibert, to name a few of the exhaustive list of artists he has worked with. This perfunctory introduction to the work is a chore that somehow was needed as it is evidence to the depth of the skill and sheer volume of work that these four musicians have accumulated.

Anyone familiar with the work of any of them might consider this album under the general rubric of progressive or ambient, both of which give a general opening. However, a clearer analogy may consider it as pointillist or impressionist sound landscapes where the minute and intricate expressions all combine in a whole rendering both an impression unavailable by examination of the parts. The base of the work revolves around soundscaping and looping, on which the instrumentation, additions and flourishes act as foreground. It creates in its expression an atmosphere and complex space for Motzer and Reuter's guitar and electronic soundscapes which move between glitch and bright ambience. None of the parts would seem to impress or dominate the space but convey in their interplay a complex and cerebral space. The residual traces of musical forms from jazz, classical and progressive rock filter through the playing, yet it resides as a form of shimmering guitar glitch ambience. At times the guitars extract metallic forms, shrill and harsh yet without the dense visceral power of industrial music, although they suggest its general area. It often has the sense of being a composed piece for cinema, as the atmospheric tendencies of the album lead to this, in the vein of Vangelis score for Blade Runner, amorphous and suggesting a complex ambiguous future. The boundary here between the idea of composition, experimentation and improvisation has seemed to be collapsed into a fluid expression of contemporary sound art."

"Descending is all about atmosphere and drift, but that doesn’t mean it’s boring. Guitarist Tim Motzer and touch guitarist Markus Reuter both have plenty of experience with ambient six-string sound, giving their pieces more backbone than most sonic clouds – the quieter work of David Torn is a touchstone. There’s nothing here that has any kind of real drive, mind you, but the leaders – joined by notable sidefolk, including percussionists Pat Mastelotto and Doug Hirlinger, flautist Theo Travis and pedal steel maestro BJ Cole – know how to add just enough filigrees, layers and details to require active listening. “Ritual Observance,” “Sound of the Sun” and the long, flowing “Emanuella” can hang in the air like aural mist if that’s what you prefer, but give them closer attention and the haunting textures will give back more than they ask for." Michael Toland The Big Takeover

*****
"Guitarist Robert Fripp often performs his ethereal ‘soundscapes’ concerts in churches, where he finds the quality of listening to be more attentive. Working in that area of ‘soundscapes’ where music is able to seem still and the equivalent of a meditative experience in a church, are the guitar duo of Tim Motzer and Markus Reuter, who like Fripp use electronics and loops to create their sublime ambience. Their basic sessions were recorded in Motzer’s studio in Philadelphia and during a radio broadcast. Then they had special guests enhance their work, including acclaimed British pedal steel player BJ Cole, who’s gorgeous tones feature on four of the six pieces. Also in the mix is Gong flautist Theo Travis, who contributed beautiful melodies and chordal loops to the opening two tracks." Chris Twomey Tandom