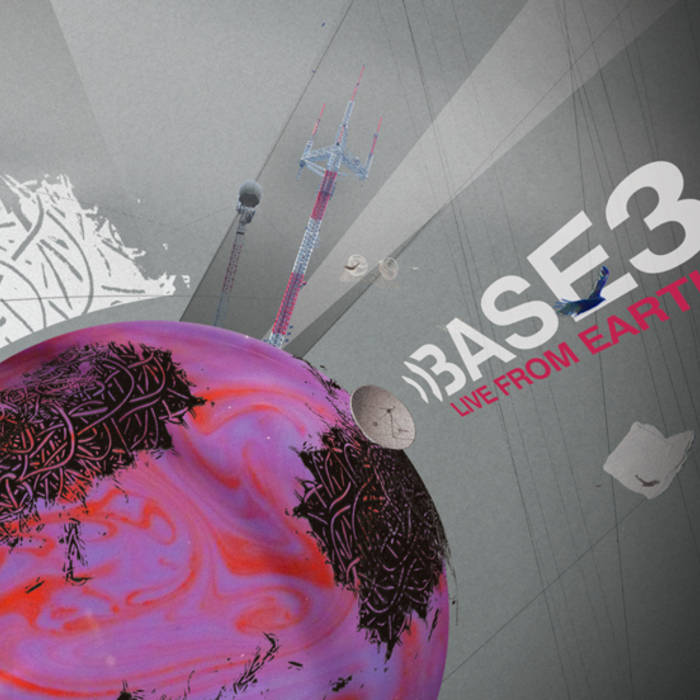 Impeccably sequenced, it gracefully processes from the impressionistic squall of Ninth Ward, and the repetitive, jagged rockface of God Particle, through to The Unanswered Call. A 33 minute-long psyche-prog shadow play that combines fluid expression and instinctive judgement calls bordering on ESP, it’s the undoubted triumph of the album.

Throughout the album, Motzer’s kaleidiscope excursions intrigue and entertain. However it’s here more than anywhere else on the album that his swaying, sustained guitar lines most ably communicate a lonesome, remote reverie with all of the exquisite eloquence of a tautly drawn haiku.

This album can be summed up in one word: essential.
*****Sid Smith Postcards From the Yellow Room (UK)-

Yet another project utilizing the skills of ultra-productive creative mastermind Tim Motzer. BASE3 is the Philadelphia, Pennsylvania based trio comprised of Motzer, Doug Hirlinger, and Barry Meehan. The tracks on Live From Earth utilize plenty of technology-driven sounds and spontaneous improvisation. These tracks are from two live performances...the first 41 minutes were recorded at The Fire in Philadelphia while the final 33 minutes were recorded at the Gojjo Sci-Fi Jazz Series. These three guys feed off one another in obvious ways, making these free-flowing progressive psychedelic compositions trippy and unique. In some ways this is a throwback to the heady music of the 1970s...but in other ways these guys are forging new sounds directly tied to the twenty-first century. Killer packaging...wildly inventive sounds...what more could you ask for? Our favorite cuts include "Ninth Ward," The Collider," "After Shock," and "The Unanswered Call." Cool and perplexing. ***** Baby Sue

This is an archive performance—no overdubs. BASE3 recorded in Philadelphia at Gojjo 4/19/09, the Fire 8/23/09, & Moonstone 9/11/09 by Tom Lindel except for the Fire performance recorded by Brendan Krivdan with live PA by Gordon Rice. Produced by BASE3. Mastered by Jeff Chestek at the Hat July 2010.


review
Culled from shows in the Philadelphia area, BASE3 features lead soloist and very active experimental guitarist Tim Motzer, who integrates jazz-rock, avant-rock and ambient soundscapes into his adventurous repertoire. Having collaborated on albums with German composer, touch guitarist and synthesist Markus Reuter in the recent past, here, Motzer and associates perpetuate a boundary-less trek into innumerable musical galaxies, abetted by a democratic, group-centric focus.

"GodParticle" is a prime indicator of what Live From Earth is all about. Largely improvised, the trio works through expressionistic idealizations akin to electronics-shaded jazz-rock, spun in a free-jazz mold. The band seldom ventures towards pure cacophony, mixing it up with pounding grooves offset by drummer Doug Hirlinger's flailing rim-shots and Barry Meehan's titanium-laced bass lines, with Motzer's multifarious baritone guitar work seasoned by polytonal distortion and airy panoramas.

The band toggles between loose frameworks and weighty, climactic choruses amid enticing improvisational segments and off-kilter treatments. The artists embed multiple storylines into "GodParticle," with variances in pitch and fluid passages, while upping the ante on numerous occasions. The outing marks an antithesis to the norm, where the musicians' multihued sound designs and seething dialogues spawn an abundance of persuasive schemas along the way.
Personnel: Doug Hirlinger: drums; Barry Meehan: bass, electronics ; Tim Motzer: baritone guitar, electronics.
GLENN ASTARITA-AAJ