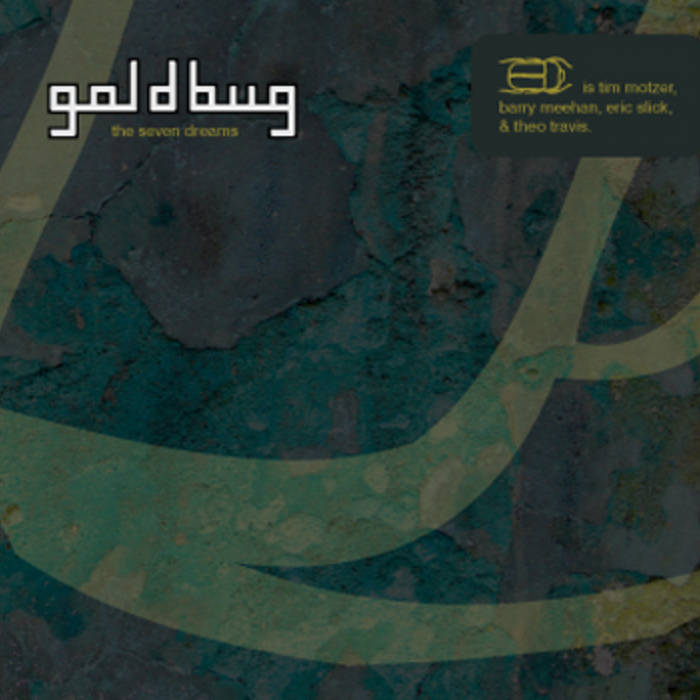 "Starting out as a project between Base3_ colleagues Tim Motzer (guitar) and Barry Meehan (bass), Goldbug came into being after a fortuitous jam session with the gifted drummer Eric Slick, then in-between sessions with the Adrian Belew Power Trio.The results are as energetic as they eclectic. After an impressionistic, FX-laden introduction, the album album gets underway appropriately enough with The Departure. Slick’s hyper-active drumming creates a beguiling rhythmic static intermittently pierced by Barry Meehan’s combative quicksilver bass runs. Motzer doesn’t so much play a solo as smear luminescent echo-drenched notes against the fields of colour and rhythm created by his colleagues.There’s a real sense of tension throughout the record that comes from never being quite sure of what might lie around the corner. Thus we have a constantly percolating space-jazz, flecked with the radiant arcs of gleaming solos, notes colliding via irregular orbits, intriguing clusters of intense interplay, interspersed mysterious dissonant events of glitch-infused electronica.The strategic addition of UK sax and flute player, Theo Travis, shifts the gears and expertly stokes up The Seven Dreams’ fiery clamour exactly when needed.The Past Is Still Present, tethered to Mehan’s recurrent motif - not a million miles away from Coltrane’s A Love Supreme - is a courtly dance conjured by spiralling tom-toms and Motzer’s sustained minimalist picking. Suddenly Travis’s tenor enters raking over the coals, adding his own spark and raucous bite. Stirring stuff for sure."
Sid Smith - Classic Rock Magazine (UK)

"Ok, time for my album of the year pick. Yea, yea..I know it’s only the end of August but I highly doubt there’s going to be another album released this year that impresses me as much as this one does. There is so much going on in this disc to dig and I hear something new each time I play it. Lots of variety and very impressive musicianship make this a work that I’ll be coming back to again and again. In a word, this disc is stunning." Progressive Ears

In The Seven Dreams, the debut from Goldbug, jazz and experimental music weave themselves so closely together they don’t recognize their own limbs. Consisting of experimental guitarist/electronicist Tim Motzer, his bass-playing partner in crime Barry Meehan, British woodwinds legend Theo Travis and young gun drummer Eric Slick, the band composes and/or improvises a set of tunes that owe as much to contemporary glitch electronica as to the ECM work of Bill Frisell and David Torn. “Shadow Memory,” the record’s jazziest and most accessible cut, opens the record with atmospheric melody and buoyant rhythm. But things take a turn for the surreal, with the following tracks bleed into one another like newspaper ink in the rain, culminating in the probing “Scratching the Third Eye.” “The Past is Still Present” reflects its title with circular basslines, steady drums and guitar licks that break the surface like random thoughts of times past, before transitioning to the soothing assertion of “Persistence of a Memory.” Slick and Meehan keep the engine swinging, even as Motzer sprays e-bow moans and laptop bloops all over the windshield. Travis just seems to appear and disappear at will, with ghostly flourishes that can’t be as random as they seem. It’s hard to tell if projects like this are one-offs or the beginning of something lasting, but on the evidence of The Seven Dreams, I hope it’s the latter.
The Big Take Over

Frayle's Gwyn Strang and Sean Bilovecky join the show to talk about their cathartic new album.